France has a new recovery mechanism for “illicit assets” [fr]

The term “illicit assets” commonly refers to goods acquired illegally by foreign political personalities or their families or friends, following corruption, misappropriation of funds or other economic offenses initially committed in their countries of origin. France can return the proceeds from the sale of “illicit assets” to the people of the foreign State in question.

When illicit assets have been confiscated in France, French law enables the State of origin to request their recovery by making a request for mutual legal assistance. This State may also bring an action before the French courts to have rights of ownership established or to seek redress by:

In the absence of such proceedings initiated by the authorities of the State in question, the funds that have been definitively confiscated by the French legal system will be automatically transferred to the French state budget, in accordance with Article 131-21 paragraph 10 of the French Penal Code.

To bolster existing mechanisms, the Programming Act 2021-1031 of 4 August 2021 on inclusive development and the fight against global inequalities established an innovative mechanism that aims to return these funds to the populations they were taken from, via cooperation and development actions.

Jean-Yves Le Drian, Minister for Europe and Foreign Affairs, believes that “this system is a very tangible method of fighting against the ravages of corruption.”

An innovative mechanism aimed at returning assets directly to the people

The United Nations Convention against Corruption is the only universal instrument that exists for fighting corruption. Adopted in 2003, its fundamental principle is the recovery of assets gained through corruption and sets out several measures to address this. In practice, recovery is rare.

There is growing mobilization to strengthen international cooperation and national legislation to enable the return of these assets. With this mechanism, France has a tool that is consistent with the highest international standards to facilitate the recovery of illicit assets.

In cooperation with the States in question, the funds returned should contribute to improving quality of life for the populations. This recovery should be implemented in compliance with the principles of transparency and accountability, in particular to avoid the funds in question being used in corruption channels.

The recovery of funds will be implemented through cooperation and development actions, but these will not be registered as official development assistance in the declarations made by France to the Organisation for Economic Co-operation and Development (OECD).

France’s new recovery mechanism for "illicit assets” will be implemented through a budget programme created in the 2022 Finance Act. It will be managed by the Ministry for Europe and Foreign Affairs, which will allocate the credits corresponding to the confiscated sums, after they are incorporated into the State’s overall budget. These sums will then be allocated to cooperation and development actions. Several organizations, including the Agence Française de Développement (French Development Agency/AFD), can then use these funds to implement cooperation and development actions with the populations concerned.

Once finalized, the mechanism will apply to every definitive confiscation of “illicit assets” in the following order: 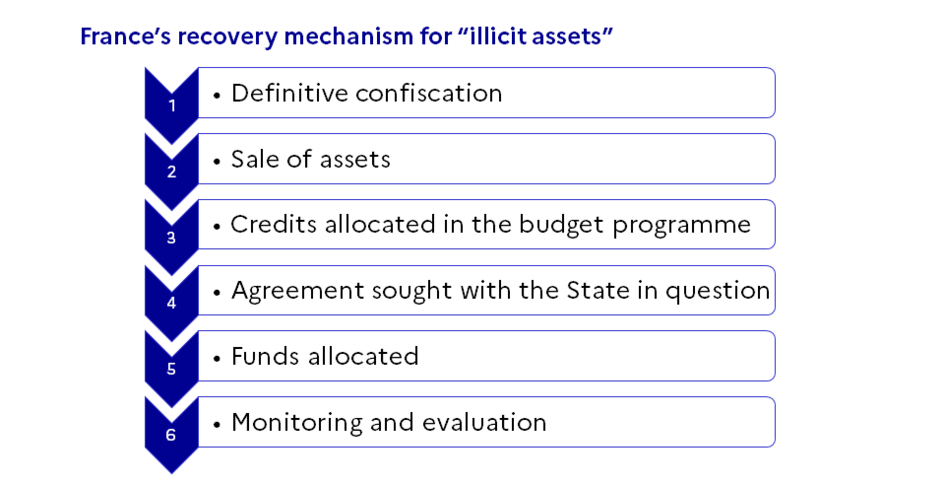 The actions financed by this recovery mechanism – including, if necessary, the agreement signed with the State – will be made public, so that, in accordance with the provisions of the act, civil society can take part in monitoring their implementation.